Meet Poppy. This self-determined Grade 12 student is serious about art. The Belgian-French student joined Antwerp International School in Grade 7. Poppy shared some of her favorite artwork with us and told us about her plans after school. Here she is in her own words.

“After school, I was going to study Psychology, but I decided to change direction and study fine art instead. It’s what I’ve always wanted to do since I was little. I spent a lot of my time over the summer painting and working on my art and I realized that I don’t really want to do anything else. I want to train in fine art, not necessarily to sell my paintings for commission to make an income, but I’m thinking about maybe later retraining in Art Psychotherapy. Certain mental patients, one of the forms of therapy they receive, is to create art to convey what’s going on in their mind. An Art Psychotherapist would guide them in doing that. I’m probably going to university in the Netherlands.

I think my teacher Mr Laird, the way he teaches art is by connecting it to big ideas or other artists. So he’s constantly recommending other artists or artwork to check out. He’s big on sourcing inspiration and having conversations about artwork. Conversations about certain ethical issues or moral dilemmas, we talk about this all the time in art class. I prefer drawing more, but now I’m working on a lot of painting, usually acrylic on canvas. 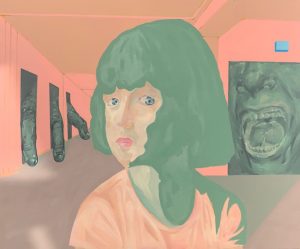 When I started this painting, I wasn’t quite sure how I wanted to go about it. By the way, that’s me when I was little. I was like 5 or 6 in that picture. The way I got inspired for the green light shining on my hair was just because I was walking around my local art store for paint. I was going to buy the pink paint and I saw this green colour and I thought it was really interesting in the way it complemented the pink. I got it and figured that I’d do something with it later. I decided to make a really overwhelming shadow with it. You can see in one of the process pictures that I started by painting the foreground. I already had the green hair and the face, but I wasn’t sure what I was going to do for the background. That was the hardest part, because I kept switching it up and I wasn’t sure what clicked with me. But I knew there had to be a source of light. Then I thought about The Shining, which is a film I first watched when younger and I’ve always liked things that are kind of creepy and eerie. I thought it was interesting how it explored certain themes in childhood and how a child relates to a parent. I decided to use the structure of The Shining hallway of that hotel because it had this door that had a source of green light coming from it. So, I laid out that structure but I wasn’t sure what I wanted to do with the colouring. I later decided to make it pink because when I was little I was a real tomboy and really rejected femininity and later in life, I realized it’s because I associated femininity with weakness. So, I tried to really get away from that. So, this was a way of showing discomfort. The pink is supposed to communicate discomfort. 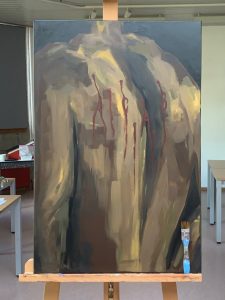 This is a painting I did at the beginning of Grade 11. This was right in the middle of the Black Lives Matters movement. I think I painted this a couple of weeks after Jacob Blake was shot 7 times in the back and his story made headlines because it was during the BLM rallies. His kids were in the back of the car during the traffic stop. It was an especially shocking story. This is his back and there are seven bullets, so seven spots where blood is dripping down. The blood forms together to spell ACAB which is an acronym that became popularised during the BLM movement meaning ‘All Cops Are Bad’. It’s not necessarily a reflection of my personal views, but I wanted to represent what was going on at that time in a way that was quite shocking for most people to look at. When I was painting this I wanted someone to look at it and genuinely be impacted and kind of horrified by what they were seeing.

In DP Visual Arts, you don’t really have to create a specific work for an assignment. You kind of have complete liberty with what you choose to create and how you decide to create it. You just need to make sure you have enough pieces by the time you need to submit for the DP Visual Arts Exhibition. But these pieces also include a process journal to go with the piece. That describes your creative process and how you arrived at your final product. So we have a lot of liberty, which I really appreciate because it lets me do whatever I’d like to do. But I think most of all AIS really trains you to be a critical thinker. It encourages you to explore new ideas, which I found really helpful in my work.

It’s my final year at AIS, but, honestly, I could wait another year! I’m excited for university but this year I realized this is the last time I will have to do this. I kind of want to do it again. I’m going to miss the relationships I have with my teachers. They really care. They actually want to know what you think. It’s not just about teaching you, it’s also about getting to know you as a person.

I think English is the subject that develops my art the most because a lot of it is very analytical which helps me figure out how I want to present something through symbolism. So when we study literary texts that really helps me because a lot of times group discussions will start and they give me some interesting ideas that I might want to use in my art.” 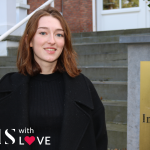 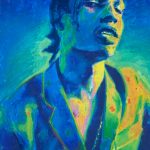 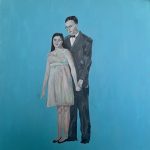 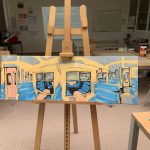