Debbie Harrison has been Booster Club president for four years at AIS and has an extensive volunteer career at the school. She has also volunteered for the Parent Teacher Organisation (PTO), the AIS Theatre Box Office, the Costume Department and as Sports Housing Coordinator. Debbie has two children who graduated from AIS, Connor and Shaelyn. Both started at AIS in Grade 2. Connor is a member of the Class of 2020 and Shaelyn is a member of the Class of 2021. This is Debbie’s fourth year as Booster Club president and her last. She reflects on her time as an AIS mother, in her own words.

“We moved to Belgium in 2009. We were previously in Denmark and before that Nigeria, but we are South African. We’ve been in Belgium for 11 years. 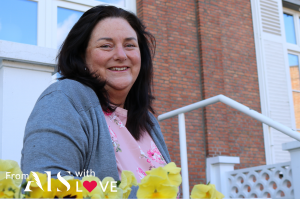 The sense of community at AIS is phenomenal and it’s not something that you can quite explain. It’s far stronger than I have felt at any of the other international schools I’ve been to. I’ve never been able to work out why. Maybe it’s because we’re a little smaller, so you don’t become a number, you actually really have a name. Also when you do something for the community, when you get involved and you become a volunteer or whatever it is that you’re doing, it really makes a big difference. It’s not a little ripple in the ocean, it’s quite a big wave actually.

I was PTO President. We had a fantastic PTO team at the time. We were very, very active in events. I saw one of the teachers post something on Facebook about the disco party we put on in February of, I think, 2017. It will go down as one of the most incredible parties. We rented this disco floor. We put it down in the Fine Arts Centre. We made it free because we wanted to give back to the community without necessarily charging. It was a fantastic party.

We did a Spring Fair, we used to do a Book Fair, we did a lot at the time. PTO can be quite hard work. But we raised quite a lot of money. We paid for some of the play equipment in the Primary School playground. There were a number of things we paid for. Quite a lot of the lighting in the Fine Arts Centre. It was very important to us that we put back into the community, back into the school.

I think it’s important when you’re on the Booster Club and you’re on the PTO, it’s important that you’re not just raising money – that you’re also telling people what they are doing. Because they participate. They come to the events. They help with the Booster Club, they help make toasties, they do housing, all of those things. They need to know what it is that they’ve done that’s helping.

We really support the Sports Department. Not just in terms of fundraising, but the concession stand, helping to hand out uniforms, just helping where we can. It’s just so much fun. It’s wonderful to be there. It’s wonderful to be doing the best we can for the Griffins. To see them come up through the different teams as they get older, how they get better, what they do and how they achieve.

We have a lot of fun. We have toastie making sessions, we make the toasties, we run the concession stand. We really are the envy of NECIS. That’s not my doing, that’s years of this positive, supportive attitude. We just set such a great example in terms of what you can do.

In 2019 we basically set a record. We made 950 sandwiches in 45 minutes. In 45 minutes! That only happens because you have enough volunteers to come and help. We don’t reinvent the wheel, we know exactly how it works. We’ve been doing it for years, we know how it works. Everyone tries to come because we know that’s the heart of the Booster Club, our toasties. I could make toasties in my sleep.

Three years ago when Amsterdam was here for their tournament, the head of their Booster said, ‘How do you get so many people to come and help?’ I said, there’s just something about AIS. Everybody wants to help. Everybody wants to make sure that it’s done in the best possible way that it can be done for the kids, for the school, for the faculty. It’s not a difficult role to run with. Not a difficult role at all. I wish I could package it in a bottle.

What makes it work at AIS? It’s the community. It’s so much for so many and it’s something different for everybody. It’s a smaller school, feeling more involved, knowing you make a difference. It’s working with people that really appreciate what you’re doing. It’s just been positive all the time. You never feel like it’s a chore. You just want to improve it all the time. It’s been good.

Connor and Shaelyn have both been very involved in sports. Shaelyn is part of the girls volleyball team that won the NECIS Tournament in 2019. How lucky is that? Two years of COVID and know that you were part of the team that were champions. It was just absolutely phenomenal. She loves that team. They were desperately sorry not to be able to play this year. They’ve got such a good bond. They are an incredibly positive team. They loved playing for Helen Flaherty; she brought out the best in them. They feel very privileged to be coached by her and also a little bit by Mr Koini. It’s something she’ll always have.

Connor got the gold championship for basketball the year before he left in 2019. They thought they would have gotten it again last year, but of course NECIS was cancelled. You can feel frustrated by COVID, but you can’t ever replace those experiences and those successes. You know, you’ve got them and that’s what I’ve said to both the kids. That you haven’t had the Grade 11 and 12 that you thought you were going to have, but look what you have got. You’ve got that memory that can never be taken away.

My husband and I are just so grateful that there are so many of the faculty who make such a big difference. Connor and Shaelyn have done well in their own ways. They’ve both been successful, they’ve both been extremely happy. I’m a big believer in the impact that an individual teacher makes. I think you can have a great school, but if you have a lemon for a teacher it doesn’t work. AIS has got some really amazing teachers. For that I will always be very grateful.