Sofia is in Grade 11 at AIS and she is on a mission. The self-determined Dutch American wants to become a doctor. Sofia shares her plan with us, in her own words. 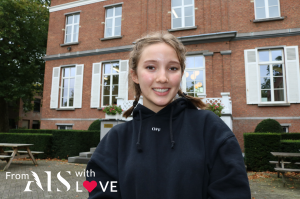 “I want to become a doctor because I’ve always really wanted to help people. I’ve always really enjoyed Biology and learning more about how our body functions because it’s never-ending and it’s a never-ending career because you always get to find out new things and I really like that. I also really like working with people a lot and I think that just gave me the right combination to be a doctor.

I first wanted to become a lawyer because I really wanted to sort of change the world and really go and make a huge difference. I really started thinking about it and I realised that it’s really hard to change the world, but you can change some people’s worlds and change their lives and help them become healthy or feel better. I think that’s a very valuable aspect of why I want to become a doctor and why I want to help.

I’m interested in working in the field of Paediatrics or Surgery, actually Paediatric Surgery. I enjoy working with kids and I really like kids, so I think that would be a great career option for me.

I did a pre-med course online. I did a live tour through four hospitals in Thailand. I had really long interviews and talks with two Imperial College doctors. They were amazing and gave me a lot of inspiration and they really taught us a lot about how to become a doctor, and what it’s like. I decided to write an article about that because I think a lot of students should become a doctor because I see a lot of students that I can see becoming a doctor and I would really like that. So, I wrote this article to encourage people and to give a better idea of what medical school would be like.

I’m taking the IB Diploma Programme, which is going to allow me to study internationally at the schools that I want to. I’m learning a lot about Biology and Chemistry which will also help me later on in Medical School. The schools I’m considering are Rice University in Houston, Yale University and Dartmouth.